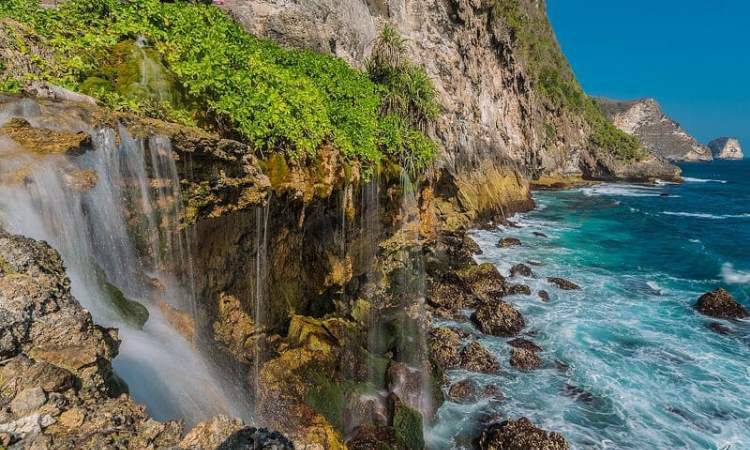 Holidays in Bali will be a fun and unforgettable moment because there are so many fun things to be had. So it is not surprising that many tourists like to vacation in Bali, especially on vacation. There are those who vacation alone, with their partners, families, and with the work community.

Every tourist who wants to vacation in Bali with challenges can visit Peguyangan Waterfall, Nusa Penida, Bali. However, Peguyangan Waterfall is only for visitors who have big guts. Visitors with a phobia of heights should not try it. In addition, before taking a vacation to Peguyangan Waterfall, it is better if tourists are in good health and do not carry luggage that is too heavy. Obey the existing rules and always be alert and careful.

Peguyangan Waterfall Nusa Penida has been operating since 1995. At that time, the water source was managed by the Public Works Office of Nusa Penida which would be used to distribute clean water to people’s homes. The springs around Peguyangan Waterfall are considered very important because they are a source of water for local residents.

The Enchantment of the Beauty of Peguyangan Waterfall

Peguyangan Nusa Penida Waterfall is a waterfall whose water plunges directly into the open sea. Above the waterfall there is an instagramable gate for visitors who like to take pictures. Not only that, this gate is also popular as a pre-wedding place. The beauty of the photo background will be more artistic with views of cliffs and greenery and of course Tembeling Waterfall.

Around the waterfall there are clear springs that are fresh and healthy. Besides being fresh, this spring is also considered sacred by local residents, but visitors can drink or wash their face with the spring. In addition to springs, there is a natural pool near the cliff and directly adjacent to the edge of the cliff and the view that can be enjoyed directly is the open sea. This natural pool can be used for swimming. Under the spring there is a temple belonging to local residents. This temple is often used for prayers and also for religious ceremonies.

To reach the location of Peguyangan Waterfall, visitors must cross from the island of Bali to Nusa Penida by using a speed boat. Speed ​​boats can be rented at a price of IDR 100,000 per person. Meanwhile, visitors who come from Padang Bai Harbor and rent a speed boat are charged IDR 115,000 per motorbike (for two people).

To get a challenging experience at Peguyangan waterfall, it takes more energy and tourists also have to be extra careful. Follow the rules to avoid unwanted behavior and always be polite and don’t walk around. Visitors are allowed to take photos, as long as it doesn’t damage its natural beauty.