One of the famous attraction is culture attraction that Bali has which is still preserved until now. One of the preserved cultures is Legong Dance of Bali that you can see directly by visiting Ubud Royal Palace. 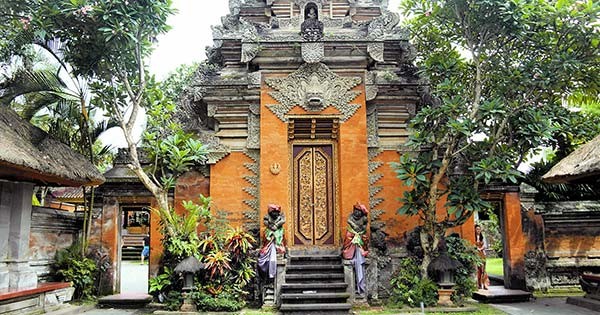 Ubud is one of the tourist spots that thick with Balinese culture. There is one place in Ubud that offering interesting and unique things to see, it is Ubud Royal Palace. This palace becomes the most loved place by many tourists who vacation in Ubud. Ubud Royal Palace which known as Saren Agung Ubud Temple is a-should-visit place. In fact, this palace always be listed on the tour agencies tour package itinerary. You will find many interesting and unique things from Ubud Royal Palace through this article. So go on!

The Short Story of Ubud Tourism

A historical record of Ubud is firstly seen from the beginning of the 8th century and written on the palm leaves. It is telling the saint of Hindu originators from India. His name is Rsi Markandeya. The name of Ubud comes from the word “Ubad” which means medicine. That is why many medicinal plants found for traditional medical treatment.

In the early 1930s, many foreign tourists came to Bali, mainly visiting the area of Ubud. It was on the reign of Tjokorde Gede Agung Sukawati. He is good at English and Dutch language. Also, he has knowledge about the King of Ubud on running a business, by build guest houses for tourists to stay in Ubud.

Currently, Ubud Royal Palace has become a tourist destination. Puri Saren Agung is the palace of the Ubud royal family, making it one of the most prominent landmarks in Ubud. The front section of the palace is open to the public, where there are walkthroughs for viewing and photos during the day.

The main attraction of Ubud Royal Palace is the Balinese dance performances that held almost every night. There are many Balinese dance performances that you can see in this palace. One of them is Barong Ubud Dance. Another cultural repository also serves such as arts, and literature. The palace’s stage and meeting halls host international events, including the opening ceremonies of the annual Ubud Writers & Readers Festival.

Ubud Royal Palace is open for public start from 9 am to 6 pm.

All visitors are welcome to enter the Ubud Royal Palace without an entrance fee which means it is free entry. Of course, during the opening hours.