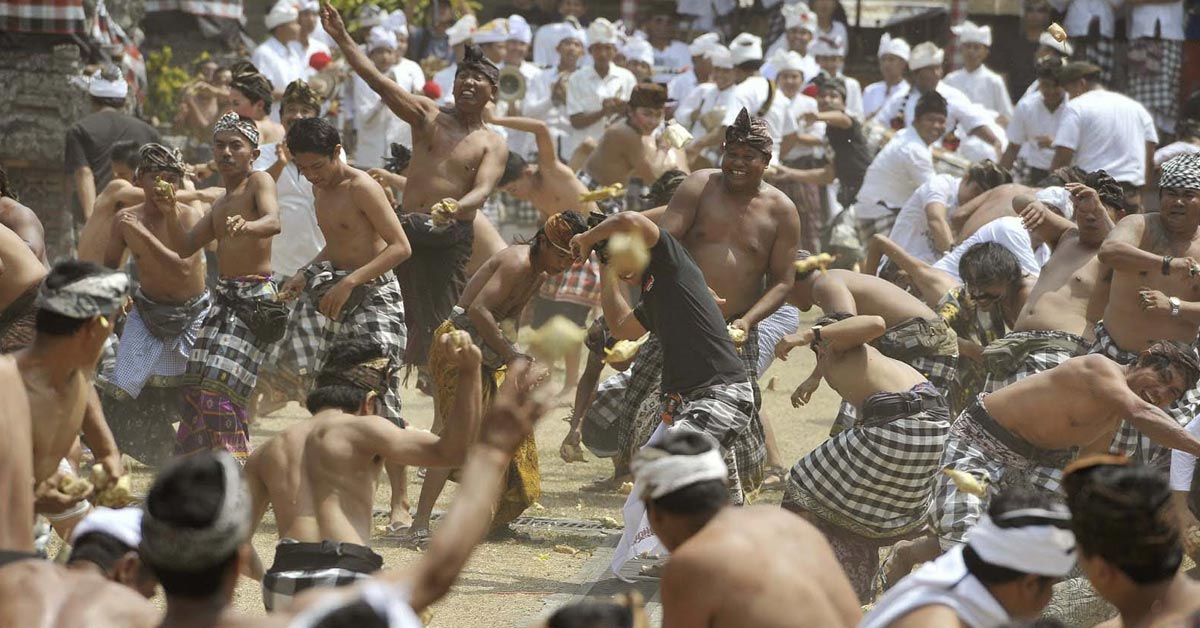 In addition to its natural beauty and tourist objects, the island of Bali is an attraction for tourists, as well as traditions and culture that are still preserved by the people in Bali that can attract tourists to come. One of the unique traditions that still exist in Bali today is The Tipat Bantal War tradition.

This The Tipat Bantal tradition is held or carried out in Kapal Village, Mengwi District, Badung Regency. This unique tradition has existed since 1337. It is carried out regularly every fourth month of the Balinese calendar (sasih kapat), which is around September – October.

As the name suggests, The Tipat Bantal War, which in this tradition involves Tipat and Pillow as their weapons. Tipat or if you know it is ketupat, which is processed food in the form of rice wrapped in woven coconut leaves or young coconut leaves and shaped into a rectangle.

While pillows are Balinese snacks or snacks made of glutinous rice which are also wrapped in coconut leaves, but this time the pillow is shaped in an oval shape.

Tipat and Bantal are also a symbol, where Tipat symbolizes feminine energy, while for Pillow is a symbol of masculine energy. The meeting of these two things is believed to give life to all beings in this world.

The Tipat Bantal war tradition takes place at the Pura Desa Kapal. The tradition begins with a prayer ceremony, which is followed by all villagers. During the ceremony, traditional leaders will sprinkle holy water as a form of request asking for the safety of the participating citizens from The Tipat Bantal War.

Then some men will be shirtless. They were divided into two groups, stood facing each other and in front of the participants the weapons to be used for war were ready, namely tipat and pillows. After the signal starts sounding, the men will begin to attack the group in front of them.

The atmosphere of the tradition is very exciting, where you will see tips and pillows flying in the air. The Tipat Bantal war that took place in front of the Desa Kapal temple, moved out of the temple. The participants got ready on the highway in front of the temple, and were again boisterous throwing each other.

Not only the participants who will be thrown tipat and pillows. The tourists or residents who come to see it will also be affected. However, even though the participants were hit hard enough, they did not consider it a form of fighting. The tradition is so exciting and filled with happy laughter.